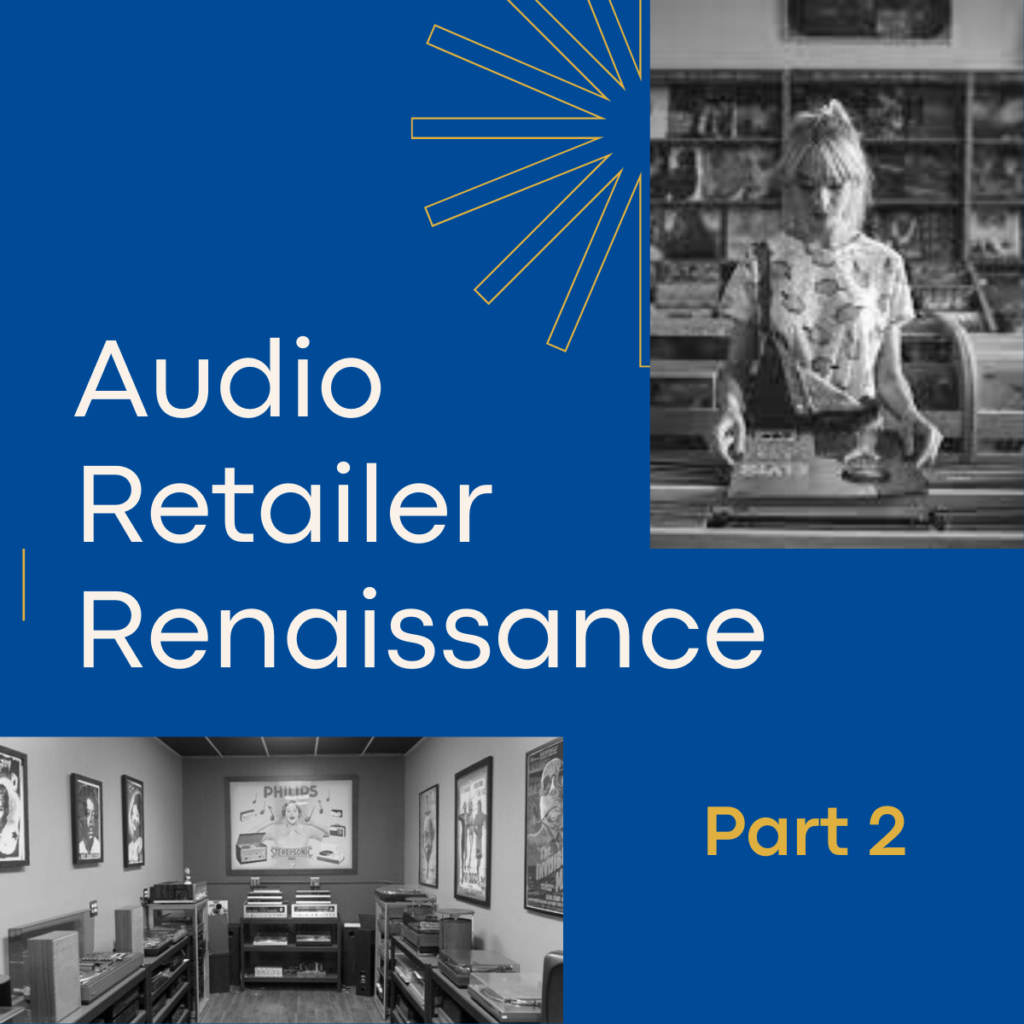 We at bluesalve Partners confidently predict that the audio industry is heading into a major new growth phase. Fresh incentives such as lossless and hi-res streaming will produce millions of new customers. Emerging applications such as hearables and AR/VR will open broad new markets. The current landscape for buying and selling is imperfect and has clearly left some gaps. Opportunity is knocking for smart, next-gen audio retailing.

Many visions can lead to market success and our observations here are by no means comprehensive or exclusionary. We believe in the opportunities and offer these insights to advise entrepreneurs and businesses to take a look at how they can capitalize.

As we noted in Part 1, the traditional approaches that sold the last audio boom 50 years ago aren't likely to work this time. The market has changed and so have most of the customers. You're no longer competing against the store across town, you're up against the Internet. A "good" music system isn't aspirational anymore – most Millennials with a smartphone and Bluetooth speaker think they've already got one. It's a given that you won't be able to beat web competition through selection or price. But while there’ve been a lot of changes in audio retailing, two ingredients for business success remain the same. You need to be savvy and you need a competitive edge. Let's start with the first one.

Niches Are the New Mass Market

Today, "audio" is sold everywhere; you can literally buy it at the local supermarket. But audio is not the same as hi-fi, and thanks to the unlikely rebirth of vinyl, even non-enthusiasts understand that there is a distinction. During the 70s-80s audio boom, consumers were bringing something new into their lives. Today, customers have had their own stereo ever since their first smartphone. There needs to be a more thoughtful approach to addressing your serviceable market. You're not selling "new" anymore. Broadly speaking, you're selling "better," and people who want better audio are a niche. Frankly speaking, it's a niche that's underserved.

From a product standpoint, the survivors among specialty audio dealers have long turned their focus to luxury goods. You can't blame them. Upscale products are not only more exclusive (less competition) but more profitable, especially when they're sold with integration services. But let's map that to today's most serviceable markets. Ask yourself how many potential customers in your region – many of them Millennials -- are ripe for a five-figure audio buy these days? Then ask yourself how many of them, from a percentage standpoint, are likely to be interested in the integration services that serve as the daily bread for most specialty retailers? Before you answer, know that home ownership among this demographic is historically low, and according to Pew Research, a majority of young adults in the U.S. are now living with their parents for the first time since the Great Depression.

Differentiation Is a Competitive Advantage

Luxury audio is a niche of a niche. Focusing a new retailing business on this sector is like saying your plan is to marry an heir or a supermodel and live happily ever after. Hey, it could happen. It's just that a lot of other folks have the same idea and there are only so many heirs and supermodels to go around. In the memorable words of one company that has been particularly successful with both young consumers and upscale products, you need to think…different.

Our advice? Think young, think affordable, think local, think hands-on, and most of all – think out of the box. There are lots of new profit centers to be had besides installing in-walls and "wiring" up a smart home (new smart homes are largely wireless after all). Even straight-on product sales – sans services – can be a profitable bedrock to a thriving audio business. There are still 40 points to be made on electronics and turntables. There are still 50 points or better to be made on speakers. And there are plenty of ways to regain the $75/hour or so an integrator usually has to charge for in-home labor. A smart retailer can make that same money or better with new services that will delight customers and bring new ones into the store.

Oh right…you're going to need a "store." We'll talk more about that in Part 3 – stay tuned!

View all posts by Austin Rouse →